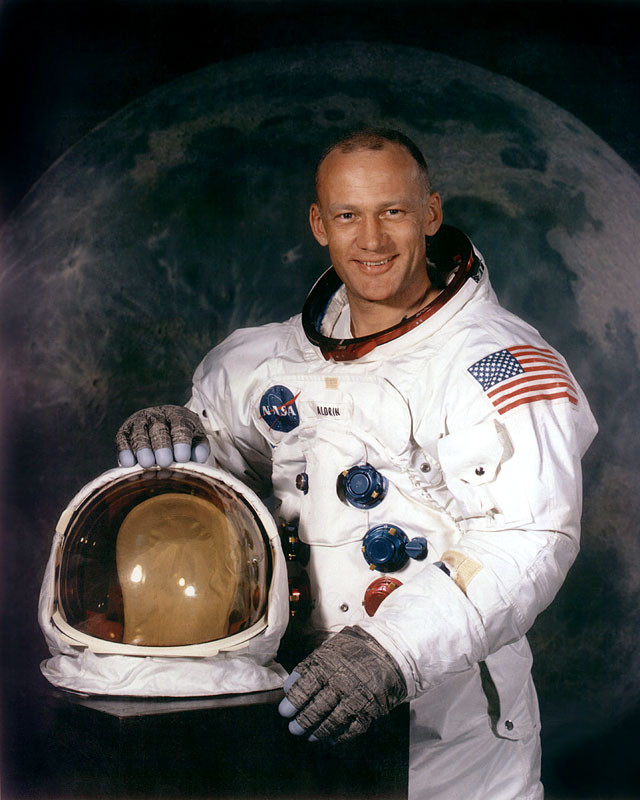 BUZZ ALDRIN –
Apollo 11
On July 20, 1969, Apollo 11 astronauts Buzz Aldrin and Neil Armstrong landed the lunar module Eagle at the Sea of Tranquility and became the first two humans to walk on the moon. This unprecedented heroic endeavor was witnessed by the largest worldwide television audience in history.
After retiring from NASA, he became commander of the Test Pilot School at Edwards Air Force Base, where Buzz concentrated his efforts on advancing man’s exploration into space.

He has since developed the concept for “The Cycler,” a spacecraft system that can make uninterrupted orbits between Earth and Mars. 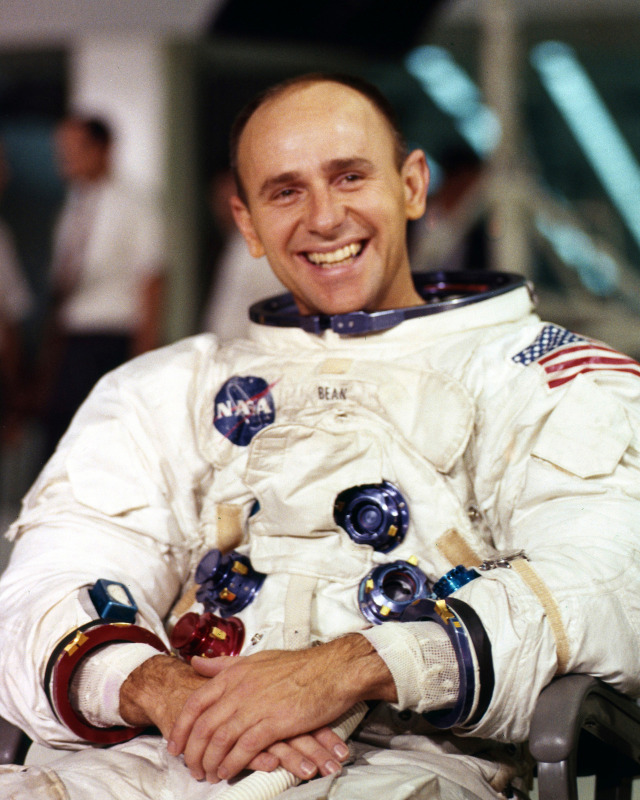 ALAN BEAN –
Apollo 12
In November 1969, Captain Alan Bean was the lunar module pillot on Apollo 12, and became the fourth man to walk on the moon, the second lunar landing.  Thirty-five years later, Bean’s footprints still lie undisturbed on the moon’s Ocean of Storms.
Bean later commanded Skylab 3, in 1973 and remained in space a whopping 59 days, logging a record-setting 24,400,000 miles.
Alan resigned from NASA in June 1981 to pursue his lifelong passion for art, drawing on his 18-year career as an astronaut for inspiration. He is the only artist in the world to use moon dust in his paintings. 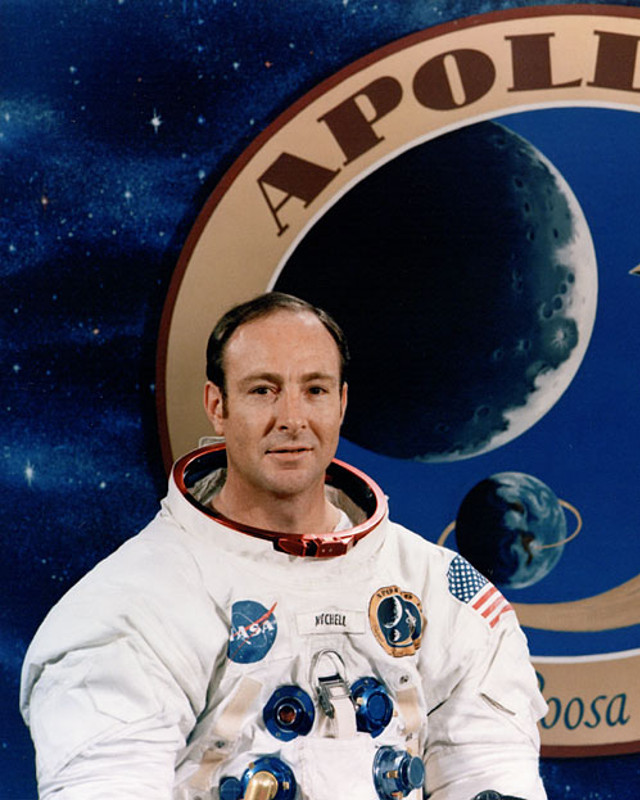 EDGAR MITCHELL –
Apollo 14
On January 31, 1971, Navy Captain Dr. Edgar Mitchell became the sixth man to walk on the moon during the Apollo 14 mission.  He shared NASA's third manned lunar landing with fellow astronaut Alan Shepard.
Mitchell recalls that as he hurtled earthward through space, he became engulfed by "a sense of universal connectedness." Edgar felt as if he was part of a deliberate, universal process and that the cosmos itself was in some way conscious.
After retiring from the Navy in 1972, he founded the Institute of Noetic Sciences to sponsor research into the nature of consciousness as it relates to cosmology and causality. 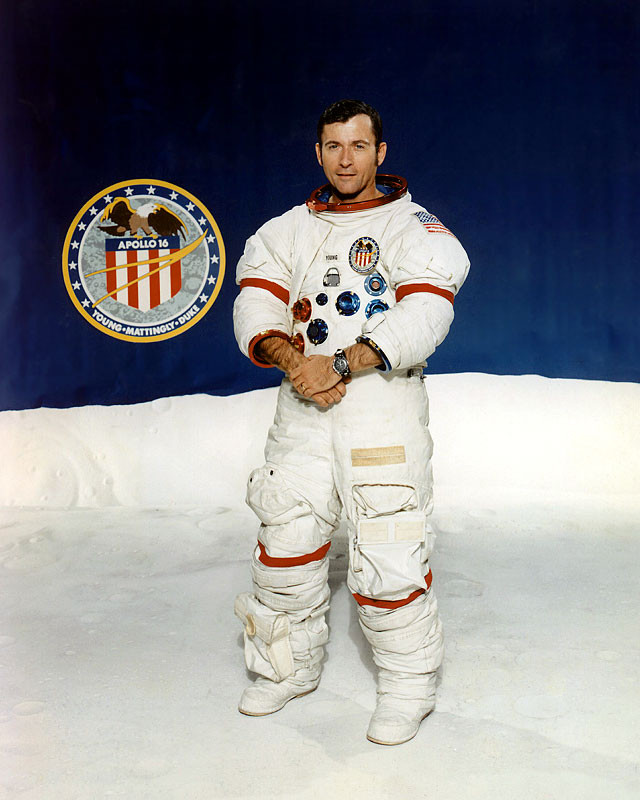 JOHN YOUNG –
Apollo 16
Astronaut John Young is the first person to fly in space six times, having twice journeyed to the moon and is the only astronaut to have flown four different classes of spacecraft.
Joining NASA in 1962, Young flew with Virgil Grissom on Gemini 3, the first manned Gemini mission. His second flight was as commander of Gemini 10, where he and Michael Collins completed two space walks. In 1969 he was the command module pilot for Apollo 10 and then became the ninth person to walk on the moon as commander of Apollo 16 in 1972.
John later commanded STS-1 (Columbia), the first ever manned flight of a space shuttle on April 12, 1981. His last flight was on STS-9 (Columbia) in 1983. 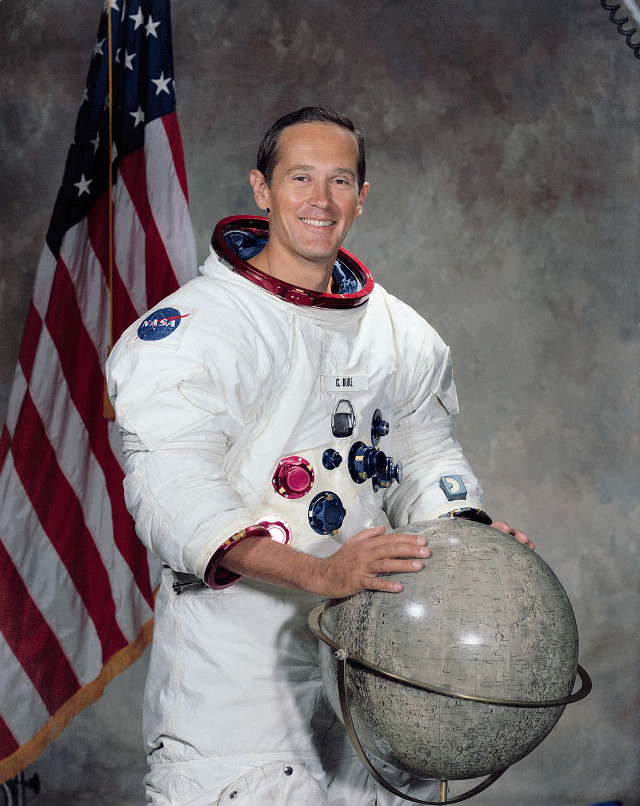 CHARLIE DUKE –
Apollo 16
Charlie Duke was born in Charlotte, North Carolina in 1935. Led by a desire to serve his country, Duke attended the U.S. Naval Academy in Annapolis, Maryland. Following graduation, he was commissioned into the U.S. Air Force which began his flying career.
Duke was a fighter pilot, test pilot and, after encouragement from his commandant Chuck Yeager, became an Apollo astronaut.  His love for adventure grew to the pinnacle of achievement when on April 20, 1972, he and John Young landed on the moon. Their stay was a record-setting 71 hours and 14 minutes, making Charlie the tenth person to walk on the moon. 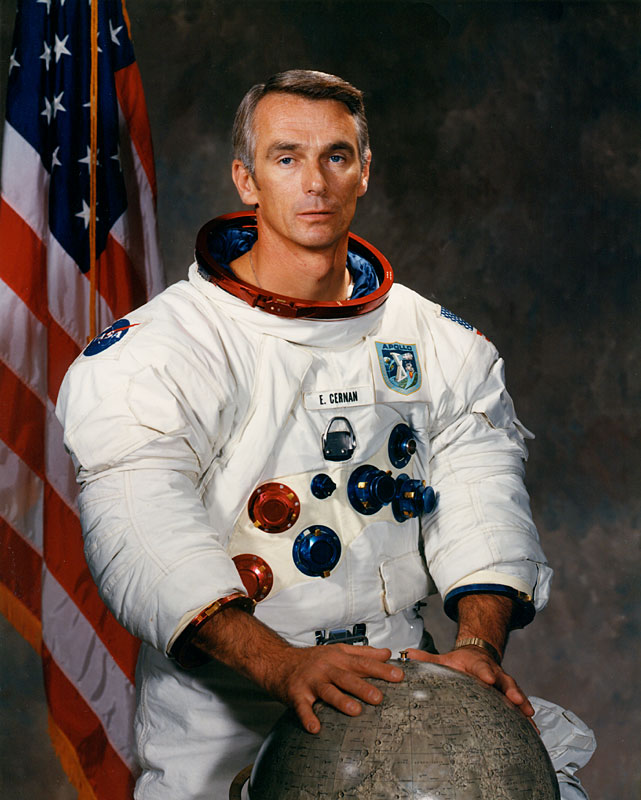 GENE CERNAN –
Apollo 17
Born in Chicago, Illinois, Astronaut Gene Cernan served 20 years as a naval aviator of which 13 were with NASA. Cernan went into space three times as co-pilot of Gemini 9A in 1966, as lunar module pilot of Apollo 10 in 1969 and as commander of Apollo 17 in 1972.
During his last mission, Gene became the the last man on the moon. Climbing the ladder of the LM, he spoke his last words: "As we leave the moon and Taurus-Littrow, we leave as we came, and God willing, we shall return, with peace and hope for all mankind. As I take these last steps from the surface for some time to come, I'd just like to record that America's challenge of today has forged man's destiny of tomorrow. Godspeed the crew of Apollo 17." 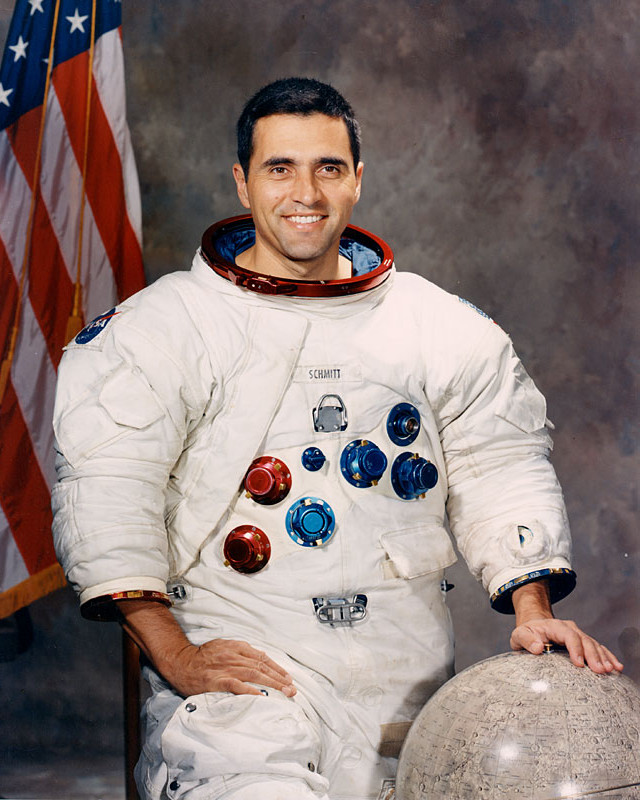 HARRISON SCHMITT –
Apollo 17
The twelfth person to walk on the moon, Dr. Harrison Schmitt began his career with NASA in 1965.
A geologist, Schmitt developed geological field techniques that were used by the Apollo crews and played a key role in training astronauts to be competent field workers when gathering samples on the lunar surface. Harrison also assisted in the integration of scientific activities into the Apollo lunar missions and in research requiring geologic, petrographic and stratigraphic analyses of samples returned from the moon.
In 1975, he retired from NASA and later made a successful run for the U.S. Senate in his home state of New Mexico.
Eso-exo.dev